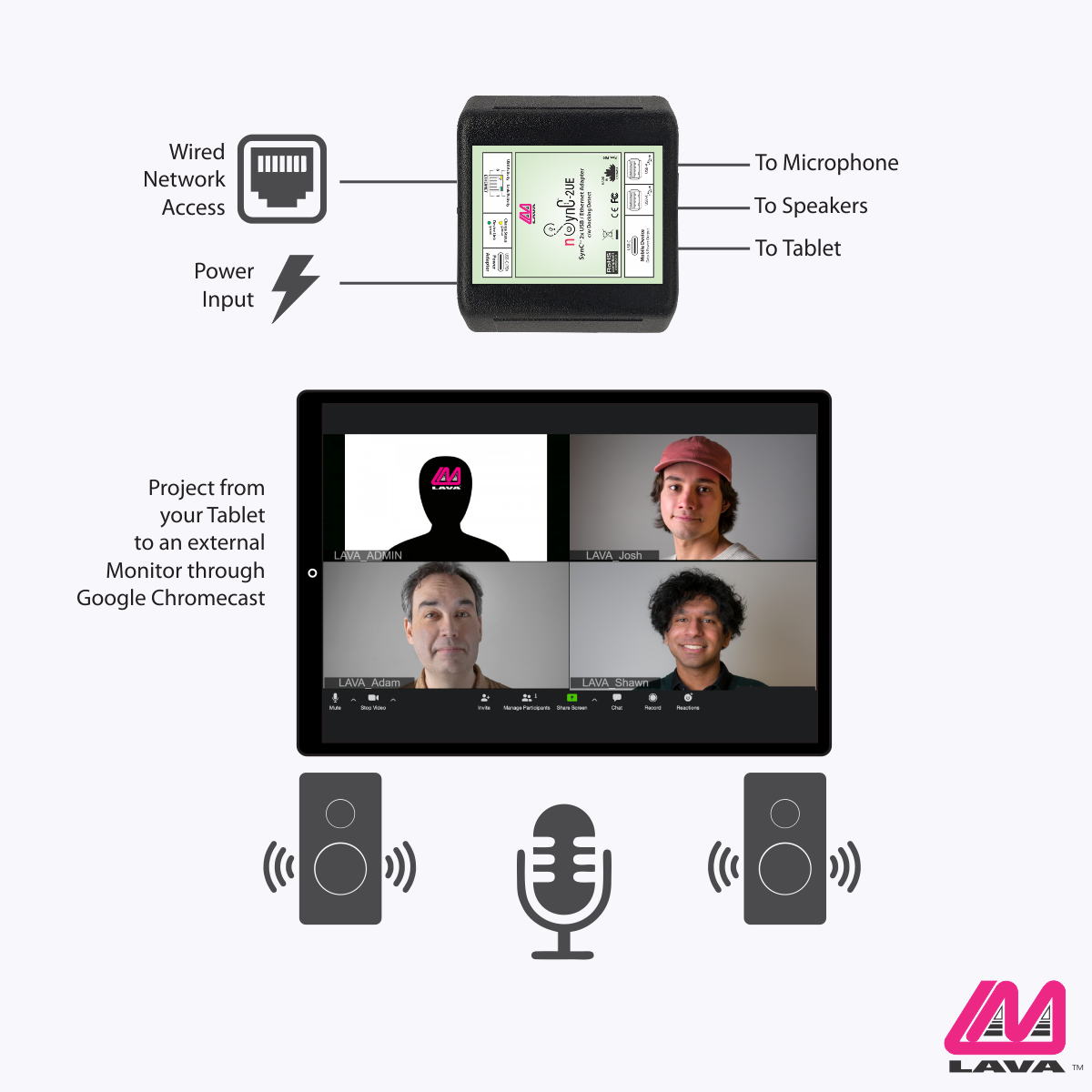 With office work becoming more digital, it’s often necessary to hold meetings remotely via video conferencing.LAVA SimulCharge adapters can help turn a tablet into a versatile solution for Zoom and other video conferencing apps, that is more cost-effective than turnkey solutions from competitors.This article looks at the use case of combining LAVA’s nSynC-2UE adapter, a Samsung Galaxy Tab A7 Lite (SM-T220) and a Google Chromecast for hooking it up wirelessly to a monitor.

The Samsung Galaxy Tab A7 Lite is an entry-level 8.7-inch tablet with modest specifications. The 2.3 GHz octa-core tablet uses a 1,340 x 800-pixel (WXGA+) TFT display, which offers a good-quality image for video conferencing. It starts at 32 GB of storage and 2 GB of RAM (there is also a 64 GB model with 4 GB of RAM available in the U.S.)

The tablet comes with a 2 MP fixed-focus front camera (which is what you would generally use for video conferencing) and an 8 MP rear camera. While these cameras aren’t exactly video production quality, they are perfectly sufficient for a standard video call.

The nSynC-2UE comes with an Ethernet port, allowing for a wired connection to the internet, which is invaluable for video conferencing. While it’s true Wi-Fi or mobile data can at times provide a fast, stable connection, it will never be as fast or as reliable as a wired connection. If you’re making that all-important call to your client in another part of the world, you want to ensure to the best of your ability that the call does not drop out due to a weak signal. The SimulCharge adapter also features two USB ports, allowing you to add peripherals, such as a microphone and speakers to transmit and receive clearer audio.

While you can access Zoom, Teams and other video call apps directly on the tablet, you may prefer to connect it to a monitor or TV in your office boardroom for a larger image. Since the Tab A7 Lite does not have an HDMI port to connect it with the second display, the best option is to use a third-party HDMI dongle, such as Google Chromecast.

Once you have plugged in the Chromecast device to the TV, open the Google Home app on the tablet. From there, you have the ability to mirror the tablet’s display onto the television. Once the screen is mirrored, you can go into Zoom (or really any app) and it will be streamed from the tablet to the television screen. The Chromecast and tablet must be connected to the same network for the mirroring to work. Chromecast will be connecting wirelessly, but you can connect the tablet to the network either through its Wi-Fi chip or the nSynC-2UE adapter’s wired Ethernet.

If the monitor is a smart TV, you may be able to mirror your tablet’s screen directly, without the need for purchasing a Chromecast. Samsung mobile devices, for example, can use the built-in Smart View app to share content to other Samsung smart devices. There are also other third-party alternatives out there for mirroring but Chromecast is one of the easiest devices to set up.

This setup varies somewhat from what you would find in a turnkey solution from Poly, Neat or Logitech, which are Zoom’s recommended hardware partners. For applications, such as Zoom Rooms, these companies offer turnkey solutions and don’t need to connect to an external PC.

These products feature touch screen controllers, with displays roughly the same size as the A7 Lite that can sit on a conference room table. However, the main device is usually a sound bar or hub. It’s is essentially a replacement for a PC or mobile device. It connects to the TV or monitor with an HDMI cable and connects to the internet either through Ethernet or wirelessly. The touch screen is basically a remote. It usually pairs with the hub or sound bar/hub via Bluetooth or connects over the same network connection. While these setups can offer some convenience, the price can be quite high and the interface can be a little limiting.

If you’re looking for a bit more versatility on where to install the tablet, you could upgrade to the nSynC-vc2UE. This adapter has all the features of the 2UE but has a built-in voltage converter and provides more options for tablet placement. The voltage converter also allows the adapter to be placed up to 50 ft (15 m) from the power source, which may be necessary if there isn’t an electrical outlet nearby. The adapter also uses a thin cable so it can be easily set up to run along the wall, avoiding any tripping hazards.

Combined with the Samsung Galaxy Tab A7 Lite tablet, the LAVA‘s nSynC-2UE is a good option for video conferencing in the board room. The adapter provides has an Ethernet port for a reliable network connection and it comes with two USB ports for peripherals to allow for greater control over the app. Add in a Google Chromecast and you can easily mirror the tablet’s screen to a monitor for a larger view. Upgrading to an nSynC-vc2UE adds a built-in converter, providing more options on where to place the tablet in the conference room. Find out more about these adapters on LAVA’s website.