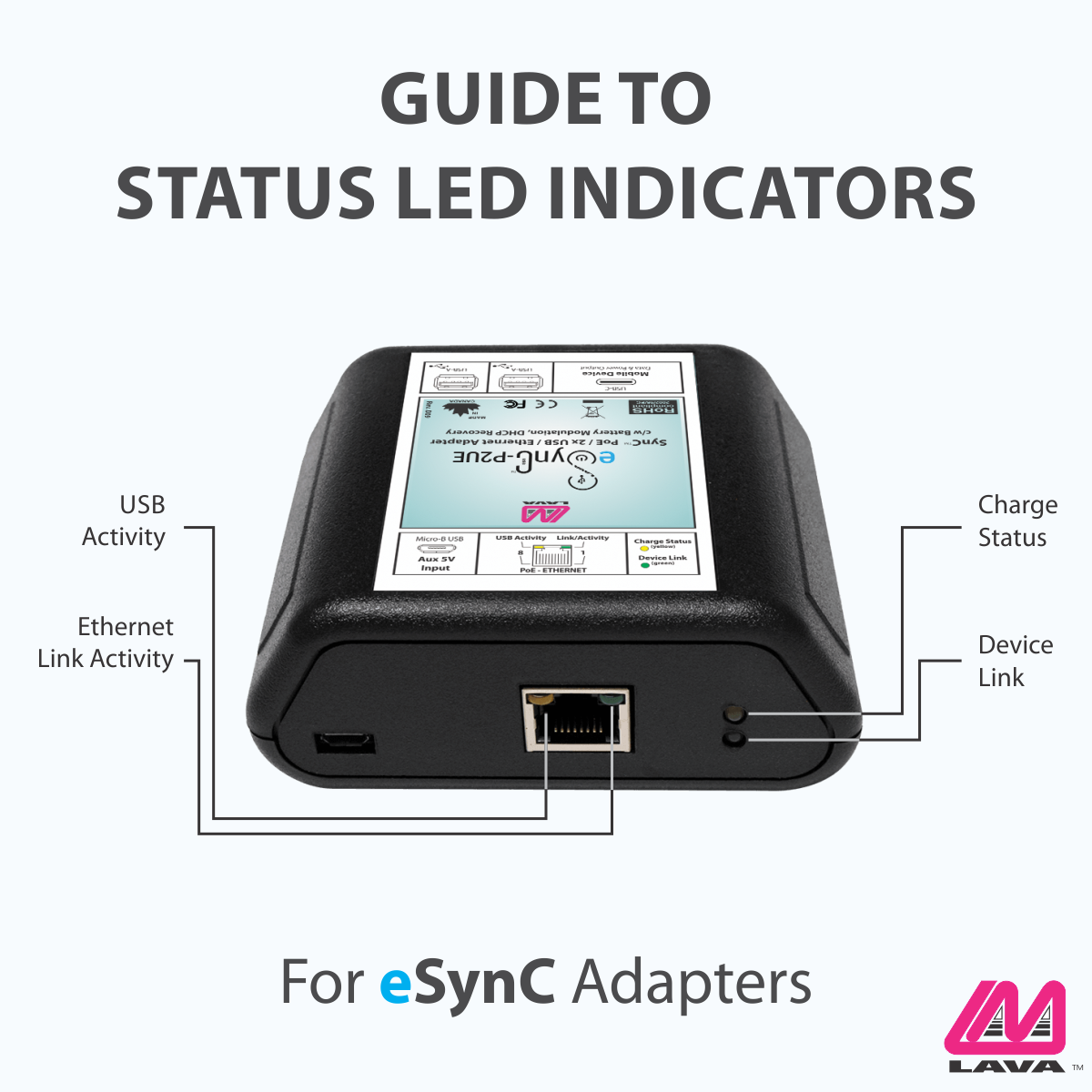 This article will look at some of the common LED blink patterns that you might find on your LAVA SimulCharge adapter and what they mean.  In this example, we will use the eSynC-P2UE adapter to showcase both USB-A and Ethernet port connections.

1-Second Blink on Both LEDS (synchronous)

If the yellow and green LED indicators on the eSynC-P2UE adapter blink at one-second intervals in unison, this means the mobile device does not have a connection to the adapter. If the mobile device is physically connected to the adapter, make sure that it appears on the published compatibility list of tested devices. (Check your mobile device’s compatibility with eSynC adapters here.) If the device is compatible, next check that you have the correct and working power cable. The USB-C must support both data and charging. The cable can also not exceed 2 meters (6.6 feet) in length.

1-Second Blink on Both LEDS (asynchronous)

If the LEDS blink at one-second intervals but aren’t synchronized (i.e. only one LED is lit at a time), this means that the RBM-equipped adapter’s extended features aren’t working. (This includes Battery Modulation, Network Recovery and Screen Brightness Management.) To fix this, make sure you have installed the LAVA Tablet Manager (LTM) app on the mobile device and that you have given it permission to access the mobile device. In the app’s General Settings, you will also want to set the proper Product Family and Protection Type for the adapter as this can also lead to issues if it is configured incorrectly.

If the LEDs are rapidly blinking, it means the eSynC adapter is stuck in the bootloader. All of the adapter’s extended features will be suspended while the bootloader is active. If the problem persists, please call LAVA technical support for help.

The USB Activity LED is solid yellow when the LAVA SimulCharge adapter is powered and connected to the device. It flashes when there is traffic between the device and a LAVA product.

The Link/Activity LED is solid green when the Ethernet Link has been established. It flashes when there is network traffic through the Ethernet interface and it is off when the device is not attached.

Hopefully, this breakdown has given you a better idea of what the status LED indicator lights do and what can be done to fix any problems they notify you too. If you have a persistent problem with your LAVA adapter that can’t be rectified with the suggested solutions in this blog, please feel free to contact us at lavalink.com/lavasimulcharge or give us a call at 1-800-241-LAVA (5282).