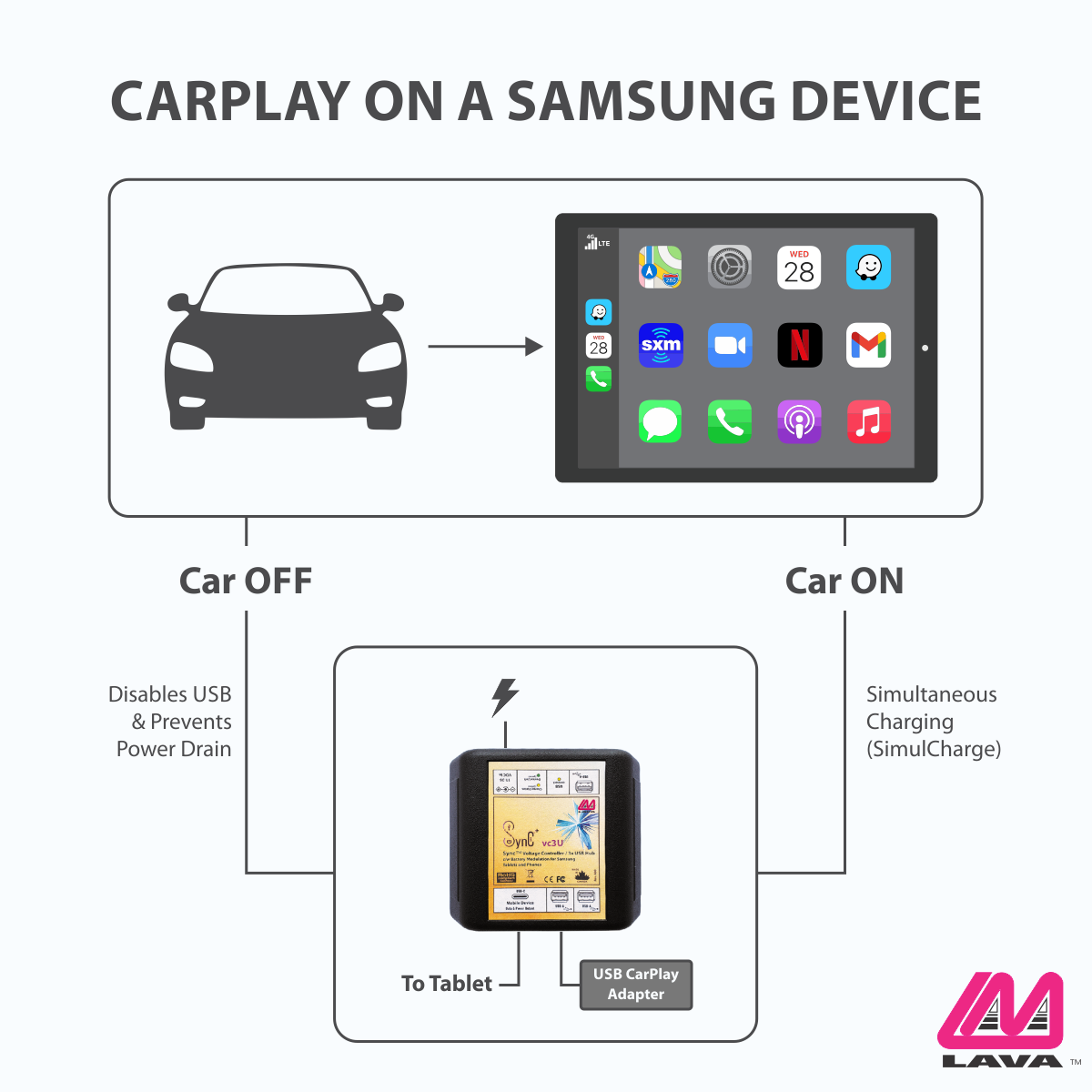 If you need to use your iPhone while driving, Apple CarPlay is a safe, hands-free option. Of course, not all vehicles have built-in connectivity so you don’t always have native access to the app. This article looks at how one LAVA customer used the SynC+ vc3U adapter (recently rebranded as the eSynC-vc3U) with a Samsung Galaxy Tab A and a third-party adapter to add CarPlay to a 2011 Honda Pilot.

In a post on Reddit, the user explains that despite wanting access to Apple CarPlay, there wasn’t an easy way to swap out the car audio head units. Instead, the customer purchased a 10.1-inch Samsung Galaxy Tab A (SM-T510) tablet to mount on the car’s dashboard and a USB CarPlay adapter to be able to use the Apple feature on the Android tablet. The setup worked but the CarPlay adapter, being connected through an OTG adapter, continued to draw power even when the tablet was in standby mode. As a result, its battery died regularly, making it an unreliable long term solution for them.

After investigating different possible solutions, the customer discovered LAVA and its SimulCharge adapters, specifically the SynC+ vc3U adapter. This adapter provides compatible USB-C Samsung mobile devices with SimulCharge (simultaneous charging and access to data), RBM technology and three USB-A ports for peripherals. It also features a built-in voltage converter that lets the user plug the adapter directly into the car’s electrical system. The voltage converter can take a DC power input of between 9 and 36 volts and then steps it down to 5 volts for use with the mobile device. The CarPlay adapter was then connected to one of the USB-A ports, while the audio connection was handled through a Bluetooth adapter which the tablet connects to when the car is turned on.

This setup solved their battery drain problem. Using the adapter’s voltage converter, the car’s electrical system kept the tablet charged. Although not discussed in the post, the adapter also features a Battery Modulation feature, which would protect the customer’s Galaxy Tab A from overcharging and its battery bloating. The feature ensures the battery’s lifespan and gives the customer additional years of use out of the tablet. If you’re looking for a slightly cheaper option, you can check out the eSynC-vc1U which only has one USB-A port but includes all of the other features of the eSynC-vc3U. If you want to use your own USB car charger, you can also opt for the eSynC-1U-OEM if you don’t need the Voltage Converter feature to further lower the cost.

While not all cars are connected, there are ways to add Apple CarPlay to a vehicle as this industrious LAVA customer has shown. With a 10.1-inch Galaxy Tab A, a SynC+ vc3U (now known as eSynC-vc3U) and a USB CarPlay adapter, this customer was able to add CarPlay functionality to their 2011 Honda Pilot. To find out more about LAVA SimulCharge adapters, check out LAVA’s website.