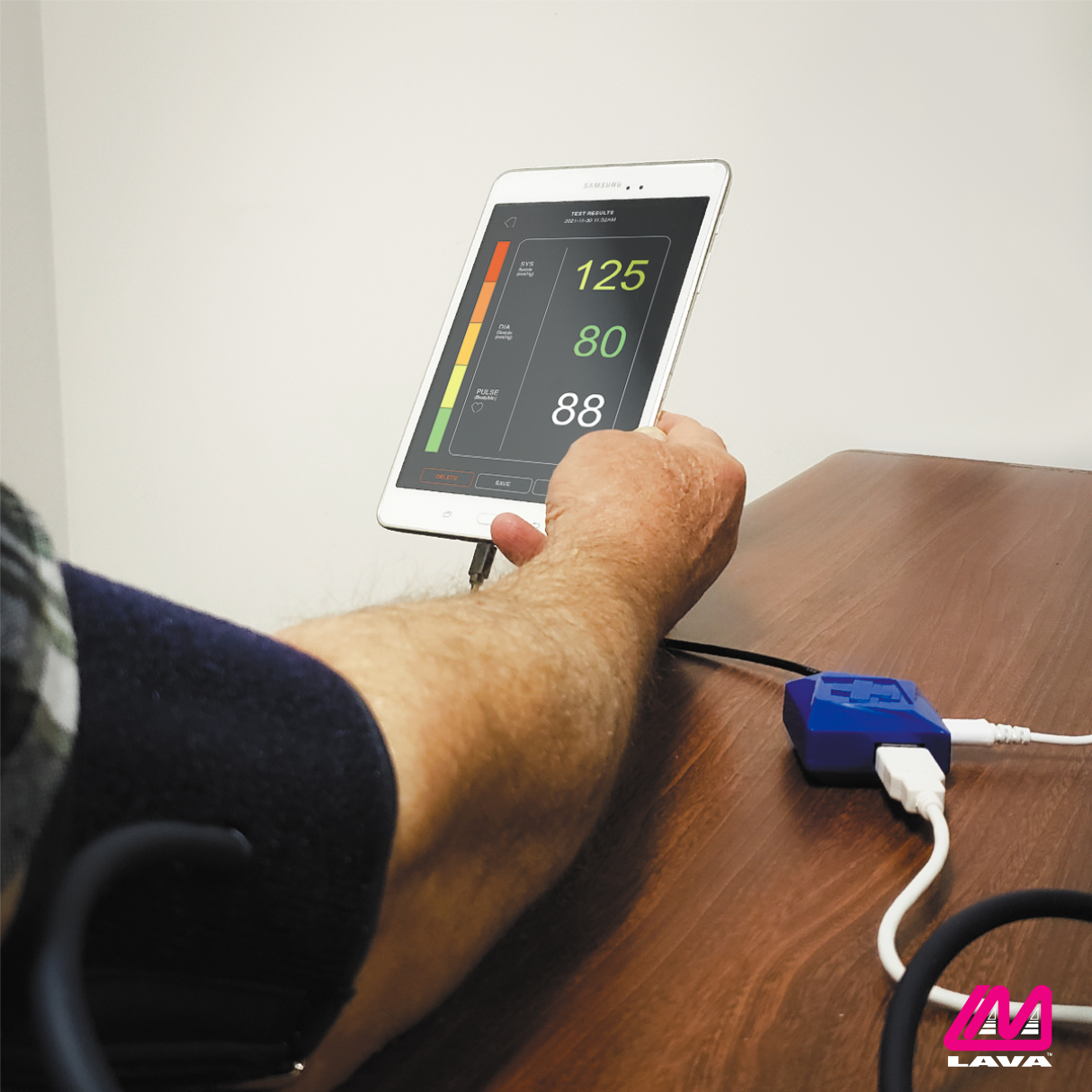 At LAVA, we pride ourselves in creating devices that fit our client’s needs. This article will showcase the origin of the uSTS-1U MINI and uSynC-1U MINI, which were created for a customer in the teleheath industry.

The client was a Canadian digital healthcare company that specialized in remote patient monitoring solutions. In particular, the company had a blood pressure cuff that could be used without the assistance of a doctor. Originally, the company had planned on using a standard OTG adapter to connect a Samsung tablet with the monitoring cuff, but this meant the tablet’s battery would drain because it couldn’t charge while it was in use. The tablet would need to be periodically unplugged from the adapter and plugged into a power source to charge. As a lot of the patients using the setup were older and not the most tech savvy, the customer worried they would forget to unplug the monitor cuff and charge the tablet and its battery would die on them. So they wanted an adapter that could charge the tablet and keep peripheral connectivity at the same time.

This made a SimulCharge adapter, which provides simultaneously charging and access to data, the obvious choice. However, the customer then realized overcharging could also be an issue if people kept the tablet plugged in 24/7. So they wanted an adapter with Battery Modulation to prevent overcharging. While the e Series line, with RBM technology, would fit the bill, it requires an app be preloaded onto the tablet to use the adapter’s battery protection features. The customer felt that their customers might not be able to load and configure the LTM application (software) properly, so they sought something that didn’t require additional software to run. For portability reasons, they also wanted something small that had its own casing.

The solution was an adapter from LAVA’s Enterprise grade u Series which incorporates plug-and-play CABM battery protection technology.  Initially, the uSTS-1U MINI, which works with select Samsung Micro USB mobile devices, was used. Later, LAVA developed the uSynC-1U MINI as the customer upgraded to USB-C tablets. The same size as LAVA’s Home Series Charge-Plus USB-C adapter, the uSTS-1U MINI and uSynC-1U MINI are SimulCharge adapters with one USB-A port, which in this application, is used to connect the blood pressure cuff to the tablet.

Most of LAVA’s CABM-equipped adapters come with a button to configure these timeouts. However for simplicity of use and compactness, the uSTS-1U MINI and uSynC-1U MINI are programmed at the factory and cannot be reconfigured by the user. CABM solved the customer’s overcharging and battery bloating issues and allowed for the tablets to be left plugged in for long stretches at a time.

The uSTS-1U MINI and uSynC-1U MINI are examples of how a customer’s needs can lead to the development of a new adapter or adapter series. Their ease of use, portability and incorporation of plug-and-play CABM to prevent overcharging makes these small SimulCharge adapters a good option for compact mobile device-powered applications.