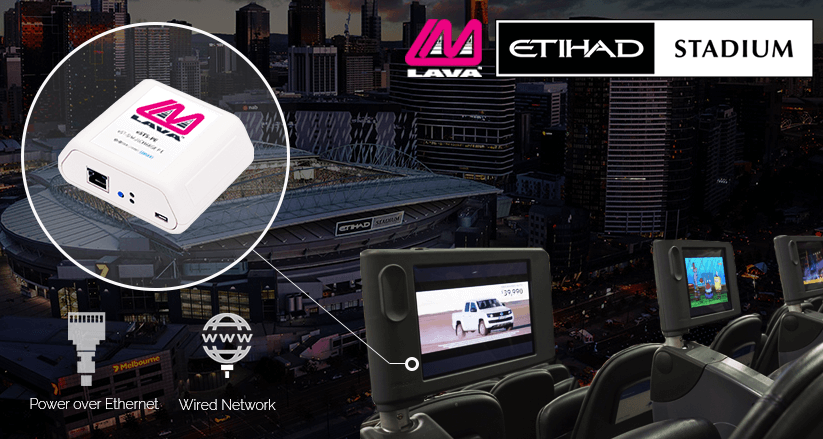 Located in the heart of Melbourne, Etihad Stadium has hosted more than 35 million fans since its opening in 2000. To keep the attendance numbers up, the stadium is continuously innovating to exceed customer expectations.

In early 2015 the stadium began a series of projects aimed at improving the fan experience. Central to this vision was the idea of a Smart Seat which creates an individual experience served directly to a visitors seat. Smart Seat technology – which includes tablet displays and a device management system – would replace some pre-existing video seats and offer high definition screens enabling fans to watch a live match along with the HD replay action. LAVA’s SimulCharge provides the core technology to deliver this solution.

The Smart Seat application takes a number of consumer-grade tablets and integrates them with a system that provides power and network data, to enable Internet Protocol TV (IPTV) streaming to the tablets. Danny Mandrides, Samsung Mobility Head, supplier of the tablets, stated that to deliver the Smart Seat application required “the creation of an ecosystem of hardware, applications, and software security to support a rich visual experience directly from the stadium seat.” An innovative approach was essential to the project’s success. The first innovation involved a solution to supplying power to each tablet. Installing electrical outlets on a per-seat basis wasn’t going to be feasible. It would have a prohibitive installation cost, extend the development timeframe and potentially result in an electrical hazard. The stadium opted for the safer, more cost effective option of utilizing Power over Ethernet (PoE)using Lava’s SimulCharge STS-PE.

Once the issue of power had been resolved the stadium needed to ensure reliable IPTV streaming to the tablets. Initially the stadium considered streaming “live” TV wirelessly to the tablets; however, due to the bandwidth requirements of HD video, it was apparent that streaming video wirelessly would negatively impact the visitor experience. The best way to provide a reliable IPTV stream for a system of this scale would be to connect all the tablets over a wired Ethernet connection.

While the tablets for this project (Samsung S2 9.7”) supports a wired Ethernet connection the stadium would have had to choose between providing network data or charging the tablets, but not both. Fortunately, Samsung knew LAVA Computer MFG could provide a solution.

How LAVA’s SimulCharge was deployed at Melbourne Stadium

In 2015, LAVA Computer MFG was contacted by Samsung to collaborate on the Smart Seat project. As a Samsung Enterprise Alliance Silver-Tier Partner, LAVA had invaluable expertise working on large scale projects involving tablet kiosk applications, similar to Etihad’s. In addition, LAVA designed and developed a line of products utilizing SimulCharge technology, which allows portable devices such as tablets or phones to operate as a USB/Host controller while simultaneously charging.

To tackle the issues at Melbourne Stadium, Lava’s STS-PE was deployed. The STS-PE adapter provides wired Ethernet connectivity, while allowing simultaneous charging capability (SimulCharge) for selected Samsung tablets. Power over Ethernet (PoE) allows network data and electrical power to be carried over a single standard Ethernet cable, thus eliminating the need for a dedicated power drop. In addition, PoE allows the Samsung tablet and STS-PE to be placed up to 328 feet (100 meters) from its power source (i.e. a PoE enabled Switch). The STS-PE allows tablet charging by converting the PoE signal to 5.2 volts for use by the tablet, thus eliminating the requirement of the tablet’s original power charger.

Thanks to LAVA’s contribution to the project, in May 2016, the installation of the initial section of Smart Seats it the Medallion Club got underway and were unveiled at the AFL match on June 10th, 2016.

The result, as stated by Etihad Stadium chief executive Michael Green is “a global first product which takes the in-stadium sports experience to another level” and “the Smart Seat technology is raising the bar, combining the very best of being at a live event with the significant recent advances made through technology.”

Innovation in the implementation of interactive kiosks continues to evolve and grow this case study marks another successful solution by LAVA using SimulCharge technology.